Are you a student looking for an exciting summer job? Get paid this summer to work on Stellarium!

The Stellarium project was selected to be a mentoring organization for the ESA Summer of Code in Space 2011: a program funding european students for working on astronomy open source projects. Please review our ideas page and submit your application here.

The stipend consist in 4000 EUR (upon project completion), and is available for students from European universities (see this page for more details).

The full moon eclipse coming "over bavaria" tonight (as said in the bavarian newpapers :) ) is a good occasion to show off the new atmospheric refraction code I finally had time to commit in stellarium (with important contributions from Georg Zotti).

The atmospheric refraction effect is a small deviation of light rays when they go through the atmosphere. It causes stars to appear higher in the sky than they are in reality, and this effect is mostly visible close to the horizon.

Luckily for the purpose of this post, today's moon eclipse is occuring very close to the horizon (in Munich) as you can see on this screenshot:


What we can see in this image that:
This refraction effect is much smaller further away from the horizon but still cannot be neglected when e.g. pointing a telescope. The blinking image below show what happens when atmosphere refraction is toggled on and off on a star field.

As you can imagine, this new feature was quite challenging to integrate cleanly in the code of Stellarium, and as far as I know, Stellarium is currently the only software able to simulate oval moons, and it does that in real time :)

To keep things short, the technical details will be the subject of another post.
Posted by fab1 at 16:19 2 comments:

If you have been wondering what Diego and myself worked on for more than a year at ESO, here is a quick video answer realized by Diego:

And here is another video focusing on the GUI:

Seeing the videos, you may now think: it looks cool, but what the hell is that?


What is SVMT?
SVMT standing for "Survey Visualization and Monitoring Tool" is a plugin for Stellarium which allows astronomers at ESO to monitor the progression and completion of large sky surveys (realized by telescopes in Chile).

The main Stellarium screen (on the left) is used to display shapes in the sky representing the locations where pictures were taken by the telescopes. A special GUI allows to specify a set of contraints defining which data set we are interested in (by default all the data is displayed, yes that's millions of stuff!). For example, a typical query is "show me only the images taken by telescope X for survey Y between date d1 and d2". The results is then displayed graphically and some more contraints can be added in the GUI to continue refining the query.

There is also the possibility of comparing the result of several queries using a system of layers: one layer per query, and each layer has a different color. This allows to answer some questions such as "What is the percentage of completion of this survey in area?".

How does it works?
Technically, the whole GUI part (on the right) was coded in QML and is actually hosted on the server and downloaded by the client at startup. The queries themselves are computed on the server side and the result are returned as JSON files and displayed graphically on the sky and in the GUI.

One of the most challenging piece of code done for this project is a library for computing the intersection and union of spherical polygons. As far as I know Stellarium's code contains the only spherical geometry library capable of managing spherical polygons which are non-convex (i.e. with holes or strange shapes) and potentially larger than 180° (i.e. larger than a half sphere). It is on my TODO list to write another post about that.


What's next?
Now that me and Diego left ESO, there is currently no maintainer for SVMT. However, the code is entirely open source (GPL license) and its design was done keeping in mind that it should be re-used for other data sets. Please contact me if you have any interest of re-using the code for other purpose.

For more info
Try a demo version (with public data sets only)
See the project Launchpad page.
Have a look at the Developers Documentation
Posted by fab1 at 17:51 2 comments:

Looking for a job

After spending some months playing with small personal projects, it's now time for me to look for a proper job! For those interested, I just updated my CV [html|pdf].

Note that I am also available for specific consulting regarding Stellarium or other programming tasks!
Posted by fab1 at 15:04 1 comment:

I finally finished to port my new game RetroCosmos to Android! In adition to the standard space invaders features of the Symbian version, the android version features cool vintage sounds I made with my old analog synthesizer (Roland SH-101) as well as a techno music background (also composed by myself!).

For those who don't own a compatible phone, I just uploaded a youtube video:

On the development side, it was quite fun to use Java again after some years of Qt/C++ and I was quite impressed by the Android SDK, even though Eclipse feels like a regression after using QtCreator for years.

The game is now available for free on the Android Market.

Follow this link for more info on retrocosmos space invaders.

In the last months I spent some days on creating a little video game called RetroCosmos with the aim of submitting it to the new Calling All Innovators contest. I coded it using Qt 4.6 and made it run on Symbian. It's now available (for free) on the OVI store.

It doesn't use any fancy technology but I really tried hard to make it enjoyable to play, and I am quite satisfied with the result :) 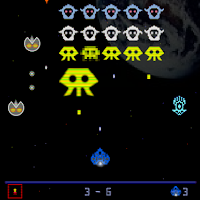 The news that Nokia is going to use Microsoft OS as its primary developement plateform really makes me sad. As many other developers I feel betrayed, after having spent so much time learning to develop apps for Maemo/Symbian based on Qt.
When I now think about the last 2 years it was pretty obvious that we, developers, couldn't really trust Nokia strategy. I started to get involved with Maemo 5 when I decided to port Stellarium to the N900 after Nokia bought Trolltech. Since then Nokia changed many time its strategy toward apps developers:

- 2009: Maemo5 and N900 were presented as developers tools. Developers should naturally continue developing the app afterward on Maemo6 which was then annouced as the future of smart phone at Nokia.
- However already at this time, different hints made us understand that finally Nokia will also keep using Symbian for smart phones as well.
- February 2010: Nokia starts MeeGO with Intel and we learnt that "the MeeGo announcement will not affect the Maemo 6 rollout schedule".
- Later we hear "Maemo 6 will be completely compatible with MeeGo, and according to Ari Jaaksi, we even can consider Maemo 6 already a MeeGo instance"
- Finally Maemo6/Harmattan never came, and we learnt that the first MeeGO release will in fact be renamed MeeGo/Harmattan (although both OSes are quite different).
- September 2010: at this point it seems that Nokia refocused again its whole strategy toward Symbian with devices like the N8 (launch of the Calling all Innovators contest for this device only with AT&T in North America).
- November 2010: a bit unrelated but still insightful about the consistency of the Nokia management: we learn that "Nokia is partnering with Yahoo! to power and improve your Ovi Chat experience in the coming months"
- Feb 2011: Now that it finally becomes reasonably easy to develop for Symbian/Maemo/MeeGO using Qt and QtCreator and that developers like me start to feel hope, Nokia decides to move to Microsoft and it's SDK.

So much strategy changes in the last year! Now let's try to extrapolate a bit this story:
- it is easy to see that the switch to MS SDK and OS will also take at least a year. At the same time Nokia will still support Symbian, Maemo and a new MeeGO device (although I am not sure I should trust Nokia when they claim it's coming).
- I can't prevent thinking that during this Nth transition Nokia is going to continue doing so bad. Share holders will be angry and will ask for more blood, and Nokia will again change its strategy. Maybe move to Android?

At the end, the loosers in this are definitely Nokia R&D and Trolltech employees. As well as all the open source community using Qt.
Posted by fab1 at 15:16 3 comments:

Chatocracy is my new website which allows people to find new friends or talk to strangers on the webcam. We tried to make it simple and funny: also, after each conversation you can rate the person you have been talking to; the better ranking you get, the more people you can talk to.

My brother and me have been working on this for the last few weeks. Propagate the word! It is still beta so if you encounter problems please report it.
Posted by fab1 at 13:24 No comments: